The other day my boyfriend said he had a culinary challenge for me. I imagined some large hunk of meat awaiting my mishandling – big pieces of meat are not my strong suit. I was relieved to see a large container of Brussels sprouts. He doesn’t like Brussels sprouts but said he was willing to give them another try.

Unlike many, I’ve always loved Brussels sprouts. Roasting has become my favorite way to prepare them. I also like sautéing shredded Brussels sprouts (with pancetta and garlic) if I’m in a chopping mood. But the ease of roasting them has won me over.

It’s real simple. Slice off a bit of each end where the hard bit of the stem remains, then chop each sprout in half. Add them to a sheet pan, making sure they’re all spread out and not piled up on each other. Toss them with olive oil, salt, pepper, smooshed garlic cloves and any fresh herbs that seem right. I used thyme.

This time instead of olive oil, I tossed them with balsamic vinaigrette. It added a hint of sweet to balance the bitterness. Instead of vinaigrette, I could have used balsamic vinegar with the oil. If you have any pancetta or other pork yumminess around, chop and add that too.

Roast at 400 for around 30 minutes or so, maybe less, I lost track of time. Give them a stir every 10-15 minutes so you can get some nice caramelization on the sprouts. I test them with the tip of a knife to figure out when they’re done. Guess who likes Brussels sprouts now? 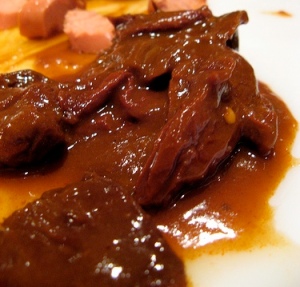 Another experiment led to a new roasted potatoes recipe. I had leftover chipotles in adobo sauce from another recipe. Normally I freeze what’s left and hack some out when I need it. But this time I decided to toss some with the potatoes I was planning to roast. Usually I toss small wedges of potatoes with olive oil, salt, pepper, garlic, herbs and/or spices. They get a nice crunchy outside where they’re in contact with the pan.

This time I chopped up three of the peppers and added them with some of their sauce to the potatoes and the rest, tossing well. Oh. My. God. So delicious. Definitely spicy but in a warming (not burning the mouth) way. I will be making that dish again and again.

Roasting vegetables is easy to do and brings out lots of flavor. I also roast parsnips, carrots, sweet potatoes, winter squash, cauliflower (the best!) and asparagus. I’ve heard of roasted green beans but haven’t tried that yet. Maybe I will tonight! What kind of vegetables do you roast and what else do you add to the pan?

Update: I roasted green beans tonight. Tossed them with olive oil, salt, pepper, lemon zest and chopped garlic. Roasted them at 400 for about 25 minutes, I think. They were a bit wrinkly and some were brown in spots when I took them out. Delicious. What should I roast next?