Here’s a quickie for a weekday night, definitely one of Rachel Ray’s famous 30-minute meals. You can tell from the recipe that preparing the fish takes only a few minutes and baking it takes about ten minutes more. I had my couscous ingredients chopped and measured before I started preparing the fish. Once the fish was in the oven, I quickly prepared the couscous, another Rachel Ray recipe.

I made a few changes, as usual, to the recipes. I coated the fish in olive oil before dredging it in a mixture of cheese and breadcrumbs. I added garlic to the couscous but omitted the orange because I didn’t have one.

I served this with the most delicious Brussels sprouts I have ever made but will post that recipe later. It deserves its own post. I know, what a tease.

You really didn’t think I’d write a post without adding some fun facts about the ingredients, did you? According to the Monterey Bay Aquarium Seafood Watch, tilapia farmed in the U.S. is a ‘best choice’ and farmed in Central America is a ‘good alternative’ but avoid tilapia farmed in China or Taiwan. “In the U.S., most tilapia is farmed in closed inland systems that guard against escapes and pollution.“ 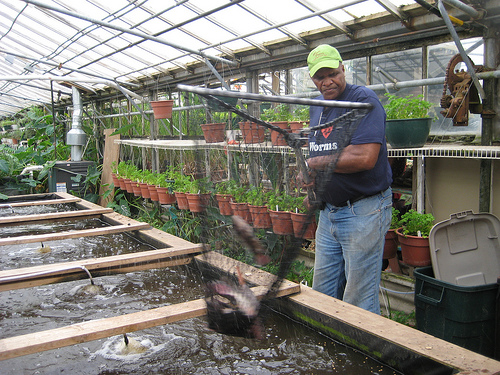 Will Allen’s tilapia farm in Milwaukee (photo by Ryan Griffis)

The photo above is why I love blogging. I learn so much. I had no idea there were urban fish farms, but here’s the proof — Growing Power in Milwaukee. He’s a MacArthur Genius too!

Back to the recipe, if you can’t find tilapia, you can substitute catfish, snapper, porgy, Pacific cod or any mild, firm fish.

Preheat the oven to 400°. In a shallow dish, combine the cheese with the paprika and parsley and season with salt and pepper. Drizzle the fish with olive oil and dredge in the cheese/crumbs mixture.

Place on a foil-lined baking sheet and bake until the fish is opaque in the thickest part, 10 to 12 minutes. Serve the fish with the lemon wedges.

Saute red bell pepper and scallions in olive oil in a heavy saucepan over medium heat until nearly soft, about 3-4 minutes. Add garlic and cook for 1 minute until just golden.

Add chicken broth and bring to a boil over high heat. Turn off heat. Add couscous and give it a stir. Cover the pot and let it sit and steam for 5 minutes. Fluff with a fork before serving.

One thought on “Parmesan-Crusted Tilapia”