No one can resist Brussels sprouts sautéed with bacon, mushrooms, onions, garlic and chicken broth, then topped with Parmesan — a recipe that will convert haters.

I live with a guy who was not thrilled when he heard Brussels sprouts were on the menu. He had only experienced boiled-to-death sprouts and wasn’t in a hurry to have them again. I assured him that my roasted Brussels sprouts would be different since they caramelize a bit in the oven and soak up flavor from garlic and herbs. They say you shouldn’t try to change a man, that’s true. But you can change their mind. He loved those sprouts.

The other night I made parmesan-crusted tilapia and couscous for dinner and thought Brussels sprouts would go really well with it. I remembered a pasta that my friend Jasper made for us during the winter in San Francisco with shredded sprouts, prosciutto and other goodies. I searched for a recipe online, found one from Serious Eats that used bacon and adapted that to my taste, thinly slicing instead of halving the sprouts and adding mushrooms.

Divine. Seriously the best Brussels sprouts I have ever had. We devoured them. 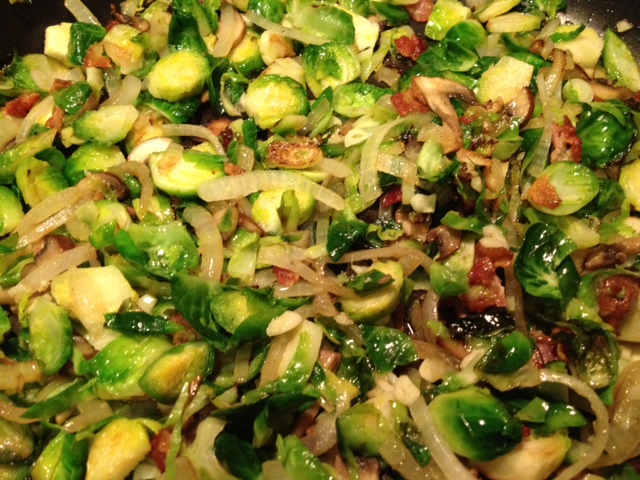 You’ll need a large skillet with a lid.

Add the chicken broth and cook until it’s absorbed. By now the Brussels sprouts should be tender as well. If not, cover the skillet and let them steam, adding more broth if necessary. Stir in cranberries, if you wish. Remove from the heat and add Parmesan, if you wish.

3 thoughts on “Sauteed Brussels Sprouts with Bacon and Mushrooms”