I’ve always wanted to be a butcher, not as a permanent job, just for a little while. I have no idea why, some sort of peasant survival skills instinct maybe. It’d be really cool to know how to break down a side of beef, wouldn’t it? That’s why I’m totally entranced by Lindy and Grundy, two twittering lady sustainable butchers in Los Angeles. I wonder if there are adult butcher camps…

I occasionally go to Walmart for groceries because Jim keeps saying it’s cheaper, but it’s crap. The produce selection can be as bad as Food Lion’s –old yellowing wrinkling vegetables from thousands of miles away. They only sell frozen fish, which isn’t necessarily so bad, but most of it’s from Asia. However, there may be brighter days ahead. Walmart has announced they will:

I’m not interested in lower prices on inferior produce; I’m still not going to buy it. How about fresher and/or organic produce at a decent price, not cut-rate, just decent? I’m not the only one who worries about the effect of Walmart’s price slashing on our food economy.

Need a new career? Ever consider the bison business? There’s a shortage because of the rising demand for bison meat, and that’s causing prices to rise. Boo. I love bison. I’m so happy when I encounter a menu that includes bison burgers – a lower fat alternative with a heck of a lot more flavor than turkey burgers, no comparison really. If you have a lot of land and a yearning to be a rancher, the National Bison Association is recruiting.

Long ago my remote control parted ways with the Food Network. I still like Rachael, Ina, Giada and Alton, but most of the network line-up leaves me cold, particularly at night when I’m more likely to tune in. So it’s not surprising to learn they’re losing viewers. I wonder how many of them moved over to their sister network, Cooking Channel, or back to good old PBS. I love food but I want to watch cooking shows, not cake and cupcake challenges.

Holy bogus blueberries, Batman! Kellogg’s, Betty Crocker, General Mills and others have been using “a concoction of sugar, corn syrup, starch, hydrogenated oil, artificial flavors and — of course — artificial food dye blue No. 2 and red No. 40” instead of the real berry. Keep it real by purchasing a pack of frozen wild blueberries. 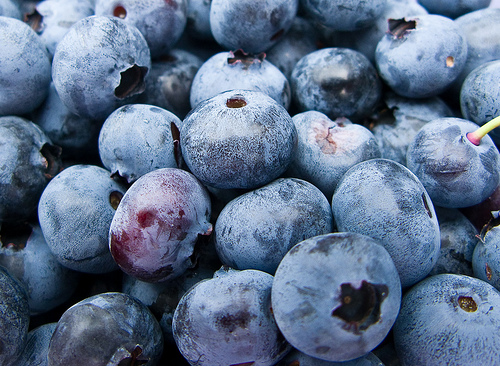