Even though St. Patrick’s Day has passed us by, don’t relegate this soda bread recipe to the seasonal file. Keep it handy for those times you want a little something extra for breakfast or a sweet but substantial side for dinner. It takes very little time to put together. I was in the midst of a cooking whirlwind making beef and Guinness stew and colcannon but was still able to get this from the bowl and into the oven while other pots were cooking away.

I learned in The Atlantic magazine that this isn’t a real Irish soda bread because it includes sugar and raisins. The real deal probably isn’t as tasty.

“It was for everyday use, and its distinctive soft, crumbly, dense texture results from the “soft” wheat that grows in the cool climate of Ireland, meaning that it doesn’t have enough protein to form the gluten structure of yeast-raised breads. Hence the use of baking soda, originally potash, as a leavening agent.”

I didn’t get the idea to make Irish soda bread until just before I started cooking dinner. I decided on this recipe from the Three More Big Bites blog because it used only whole wheat flour, plus I already had all the ingredients on hand. I always keep dried buttermilk in the cupboard for just these kinds of last-minute baking whims. You can usually find it in the baking aisle. If you have vanilla sugar in your cupboard, use half granulated and half vanilla sugar for the recipe, and sprinkle the top with vanilla sugar.

Vanilla sugar is real easy to make. Fill a saved-from-recycling glass jar with granulated sugar. Slice a vanilla bean lengthwise with a sharp knife. Scrape the tiny seeds onto the knife blade. Stick the bean and the seeds into the sugar. Give it a good stir. Seal the jar and let it sit a few weeks. I like to occasionally sweeten and flavor my coffee or tea with vanilla sugar or add it to recipes like this one. 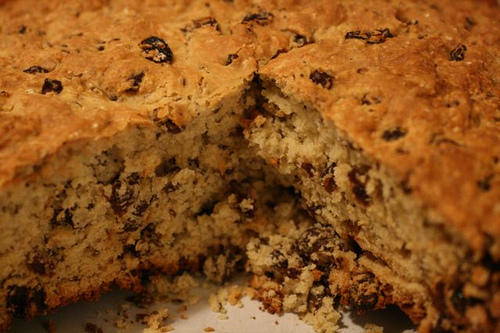 Preheat oven to 375°F. Spray 7” cake pan with nonstick spray. Whisk flour, 5 tablespoons sugar, baking powder, salt and baking soda in large bowl to blend. If you’re using dried buttermilk, add it to the dry ingredients. Add butter. Using fingertips, rub in the butter until is mixed in. Or, do what I did and blend the dry ingredients in a food processor, add the butter and pulse to mix it in.

Using floured hands, shape dough into ball. Transfer to prepared cake pan and flatten slightly. The dough will not come to the edges of the pan. Sprinkle dough with the remaining 1 tablespoon sugar.

Bake bread until a toothpick inserted into the center comes out clean, about 45 minutes. Cool bread in pan 10 minutes. Remove from pan and serve. 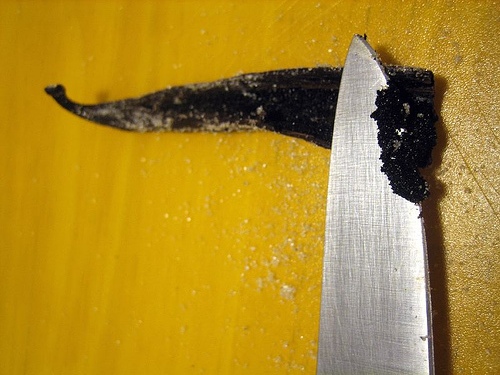