Blue cheese is one of those love it or hate it ingredients. I’m in the love camp. If I’m having a salad before dinner, most likely it’s topped with some crumbled blue cheese.

The Salemville brand has been on sale lately at Lowes Foods so I’ve been enjoying their Gorgonzola. So creamy with just the right amount of funk. Wouldn’t it be good in a pasta cream sauce? Hmm. But Jim is in the blue cheese hater camp, so there’s no use making something like that for dinner. Unless he’s not home for dinner.

And soon enough, Jim went away one long weekend for his annual deer hunting trip to the mountains. The tradition was started many years ago by his dad and his dad’s best friend. The sons and grandsons always went along. The old men are gone now, rest their sweet souls, but the sons carry on the tradition. I imagine lots of cussing, farting, and sports talk.

While my honey was off getting some venison for the freezer (three deer!), I was indulging in this rich, comforting pasta. Spinach salad was my inspiration. What makes a good spinach salad? Bacon, mushrooms, and red onions.

Instead of spinach, I used tatsoi in this recipe. But since spinach is easier to find, it gets the co-star treatment in the title. Tatsoi with its dark, firm leaves is like spinach’s beefy older brother. The larger bunches have crunchy stems like bok choy. Tatsoi cooks quickly, like spinach, and can be used in place of spinach or other greens in all kinds of recipes. 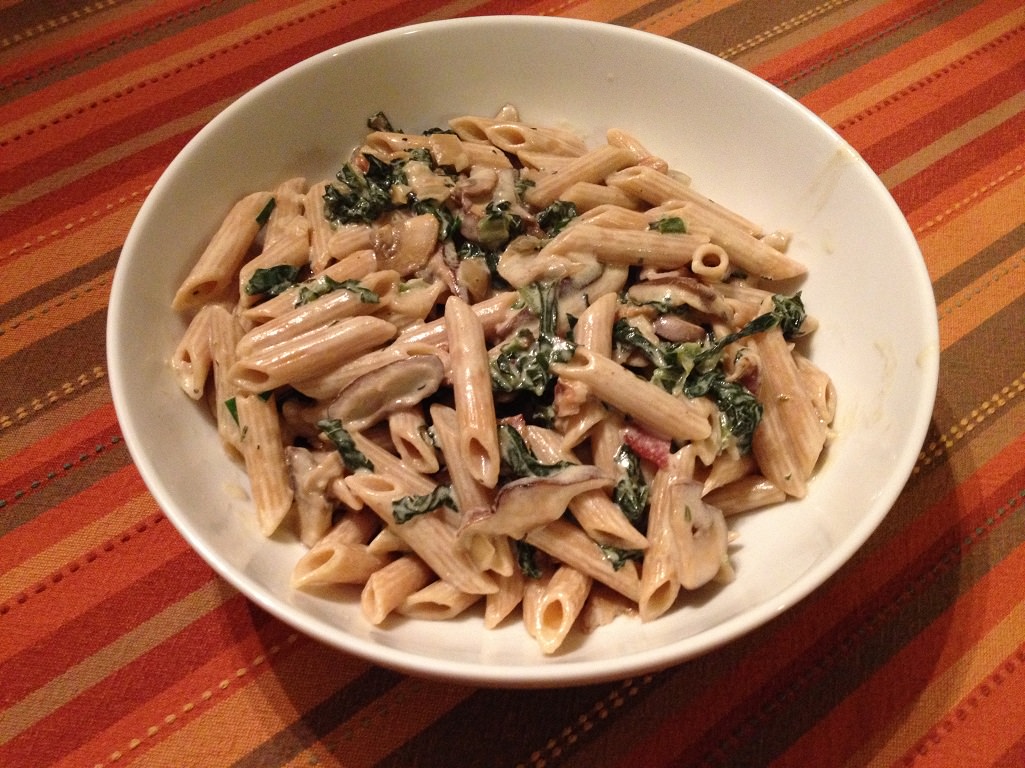 Gorgonzola Pasta with Spinach and Mushrooms

Bring a large pot of salted water to a boil.

Meanwhile, sauté the bacon for a few minutes in a pan over medium-low heat. Add onion, red bell pepper and mushrooms, with a bit of olive oil if you need more fat in the pan, and sauté until just softening. Make a space in the middle of the pan and add the garlic plus a bit of oil (or butter) on top of it. Cook one minute. Add spinach or tatsoi and stir everything together. Cook until the greens wilt.

Cook the pasta according to the package directions. Reserve 1 cup (or more) of the cooking water and drain the pasta in the colander. Reserve more pasta water if you plan to have leftovers – stir it into the pasta before refrigerating to help retain creaminess.

Add the cream, Gorgonzola, thyme, 1/4 teaspoon pepper and a pinch of salt to the pan and bring to a boil over medium-high heat. Cook, stirring frequently, until slightly thickened, 2 to 3 minutes.

Reduce the heat to medium, add the cooked pasta. Cook, stirring constantly, until some of the sauce is absorbed by the pasta, about 2 minutes. If necessary, add some of the cooking water to moisten the pasta. Season to taste with salt and pepper, and serve.

4 thoughts on “Gorgonzola Pasta with Spinach (or Tatsoi) and Mushrooms”