Spaghetti Carbonara for breakfast—now that’s good living! Nope, I didn’t make it myself. I brought home a giant bowl’s worth in a “doggie box” from our book club meeting last night at Anthony’s in Clayton. My oh my, it’s so good.

If you’re looking for more dinner inspiration, here are a few recipes I made this past week and a few I may try next week.

By the way, I’m publishing my list of recommended fiction and non-fiction ebooks on sale on Saturday mornings in a separate post, On the Bookshelf. But since we’re in my virtual kitchen, I’ve included a list of great deals on e-cookbooks and food books at the end of this post.

This recipe for Maple Cardamom Salmon is a good one to keep on hand. It’s easy and quick with a nice flavor. I roasted cubes of sweet potatoes and rutabagas with garlic, cinnamon, smoked paprika and sea salt for a side alongside some leftover kale.

I made two sheet pans of those root veggies and an extra big piece of salmon so we would have lots of leftovers for salmon breakfast hash with fried eggs on Sunday morning. I sautéed onion, poblano pepper and red bell pepper first, then added the leftovers along with two minced chipotle en adobo. Mmm mm.

On Sunday, we had Red Wine Risotto with Pinto Beans, Salami, Cabbage and Pancetta. Don’t be put off by what might seem a strange mix of ingredients. One word: fantastic. It wasn’t one of those risotto recipes that makes you stand over the stove to continually stir. The leftovers were just as good on Tuesday. I served it with Creamed Collards Deluxe.

I pulled some mahi mahi from the freezer for my next dinner duty night. Made a quickie Meyer lemon-thyme butter sauce for the mahi along with frozen broccoli and a package of 90-second brown rice/quinoa on the side. I’m not always a scratch cook. 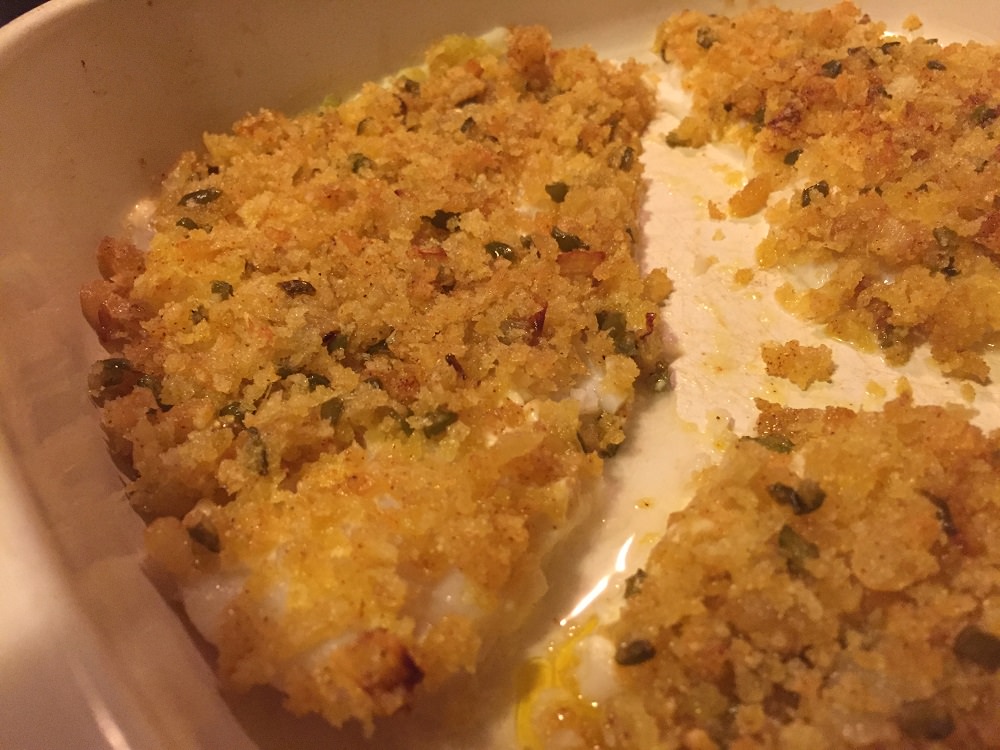 Tonight, I’m making Flounder with Spiced Breadcrumbs (photo above), a recipe that takes hardly any time at all. The crumbs are more than just spiced—they include minced red bell pepper, onion, garlic, parmesan cheese and paprika.

Roasted Brussels sprouts with some type of hot and sweet peppers will be one side but the other will depend on what’s in the market. I like the looks of this Braised Endive and Fennel Gratin with Cranberries. If I can’t find endive and fennel—always a possibility around here, grr—I’ll try for a Celeriac/Potato Mash with sautéed onions and garlic as Plan B or, Plan C, Sweet Potato Mash.

I’ve got my eye on two recipes for Sunday. Which will it be?

If you can’t get to those recipes because of the New York Times paywall, do what I used to do: search for and delete “nytimes” cookies on your browser. I have a subscription now because I got tired of doing that but that hack works in a pinch.

Hopefully, I’ll have enough salmon leftovers for one more night. I have two boneless 1” pork chops in the freezer so I might try one of these recipes.

Bok choy is in season, and hopefully I’ll find some at the farmers market this weekend. Either way, I’ll make these Spicy Bok Choy Noodles.

Of course, I may go in an entirely different direction for all of these meals. I’ll report back next week on what I ended up making. 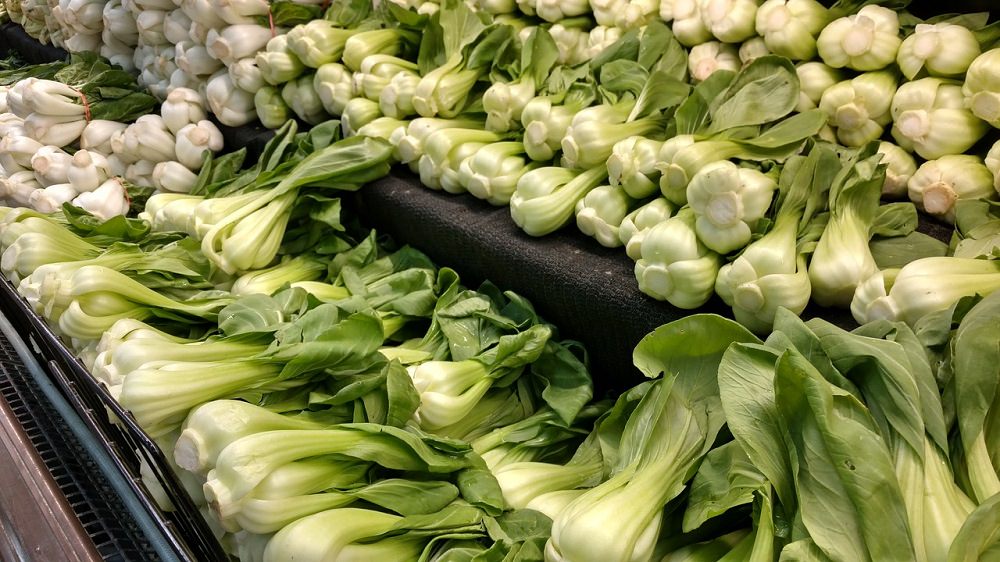 e-Cookbooks and Food Books on Sale

Caveat: Ebook sales like these sometimes only last a day or a week, so act quickly.

Get ready for St. Patrick’s Day with one of these Irish cookbooks…

“Contemporary Irish cooking means not just a rustic, stick-to-your-ribs Irish Stew with Brown Soda Bread, but also Green Tomato Tarte Tatin, as original and sophisticated as one found anywhere in Europe. The book reads like a tourist itinerary for hungry pub crawlers…and shares history on favorite pubs and their famous and infamous patrons and proprietors.” (Publisher’s Weekly)

The Country Cooking of Ireland by Colman Andrews and Darina Allen ($4.99, 79% off)

“If Failte Ireland want to use just one thing to promote Ireland overseas, The Country Cooking of Ireland is the book that they need to thrust into the hands of potential tourists. Writer Colman Andrews has [an] impeccable pedigree…he ate his way through the high- and byways of this country to put this book together…his eye always cocked for an artisan producer, local specialty, or place featuring good food. The usual chapters on soups, fish, poultry, meats and baking are supplemented by sections on savoury pies, salmon…, potatoes…and a soda bread-focused bread chapter. There are little essays scattered throughout the book on a historical and factual topics…He quotes widely from Irish cookbooks, over 100 of which are mentioned in the extensive bibliography, and recipes from all eras are included.” (BiblioCook)

Bloomfield is a Michelin-starred chef in New York. “A vegetable-centric (but not vegetarian) collection of recipes inspired by Bloomfield’s childhood, chefs she’s worked for, and her restaurants…high-level, restaurant-quality recipes… There just aren’t that many entrees. Soups and sides, sure, and but main events? Not so much… [Many] require higher level techniques… [although] there are some simple recipes in Greens.” (Epicurious)

“Showcases the many roles of America’s first celebrity chef: teacher, culinary alchemist, restaurant reviewer, occasional dieter, visionary, and gourmand…each essay resonates with impassioned opinions and a distinctly American voice. Beard takes us on a journey from his childhood in Portland, Oregon, to his dining and cooking experiences around the world. These reminiscences, paired with more than 130 recipes, provide an intimate portrait of a lifetime spent studying, preparing, and enjoying food…Heartfelt, enlightening, and often humorous, these memoir-like selections are an inspiring addition to any culinary collection.” (Amazon)

Named one of the Ten Best Nonfiction Books of the Year by Time. “In this urgent and unique book, chef Michael Gibney uses 24 hours to animate the intricate camaraderie and culinary choreography of an upscale New York restaurant kitchen. Here readers will find all the details, in rapid-fire succession, of what it takes to deliver an exceptional plate of food—the journey to excellence by way of exhaustion.” (Goodreads)

“Lakshmi opens a window into her life, weaving together stories from her childhood, her love affairs and her work through the lens of the culinary experiences that eventually shaped her fame. The book appears to spare little, delving deeply into personal details about uncertainty over paternity during her pregnancy, the pain of a custody case and her efforts to overcome the insecurity she felt being Indian… Ms. Lakshmi particularly highlights her high-profile relationship with the author Salman Rushdie, which was overshadowed by a fatwa, or religious edict, that had been issued in 1989 by Ayatollah Ruhollah Khomeini, Iran’s former supreme leader…Her memories in the book are interspersed with recipes.” (New York Times)

“The story of how one expat woman left her beloved behind when she moved to France-her beloved kale, that is. Unable to find le chou kale anywhere upon moving to the City of Light with her new husband, and despite not really speaking French, Kristen Beddard launched a crusade to single-handedly bring kale to the country of croissants and cheese. Infused with Kristen’s recipes and some from French chefs, big and small…, Bonjour Kale is a humorous, heartfelt memoir of how Kristen, kale, and France collide.” (Amazon)

Looking for more deals? Check out last week’s list to see if any of those are still on sale.

Amazon book links are affiliate links which allow me to earn a small commission on any sales that result from clicking. Thank you.