About a month ago, eggplants of all kinds and shapes appeared at the farmers market. When I first saw a display of them, eggplant caponata came into my head. I made it on a Sunday to serve as a side later in the week. My version (linked above) has eggplant, red onion, red bell pepper, garlic, capers, olives, oregano, basil, and balsamic vinegar.

Caponata also makes a great snack or appetizer on toast points or small slices of crusty white bread. Come to think of it, I bet it would be terrific tossed with pasta too.

Okra is at every farm stand now too. I know okra isn’t everyone’s thing because of its mucilaginous (isn’t that a great word?) innards. But that’s a shame because it’s darn tasty. I’m still discovering Southern dishes. One of my recent favorites is fried pickled okra. Oh. My.

A few weekends ago, the Greenville (NC) convention center hosted my state association’s conference. One night, waiters passed trays of fried pickled okra with a remoulade sauce (or something similar) for dipping. I hovered and partook. Repeatedly. I now have two different, highly-rated, deep fat fryers on my kitchen Amazon list. I’m either going to wait for a sale or my birthday to buy one of them—whichever comes first.

And a totally random observation that will be of interest to meeting planners and caterers: the waiters at the Greenville Convention Center wore white t-shirts with hand-written stickers describing what dish they were carrying on their tray. So smart! 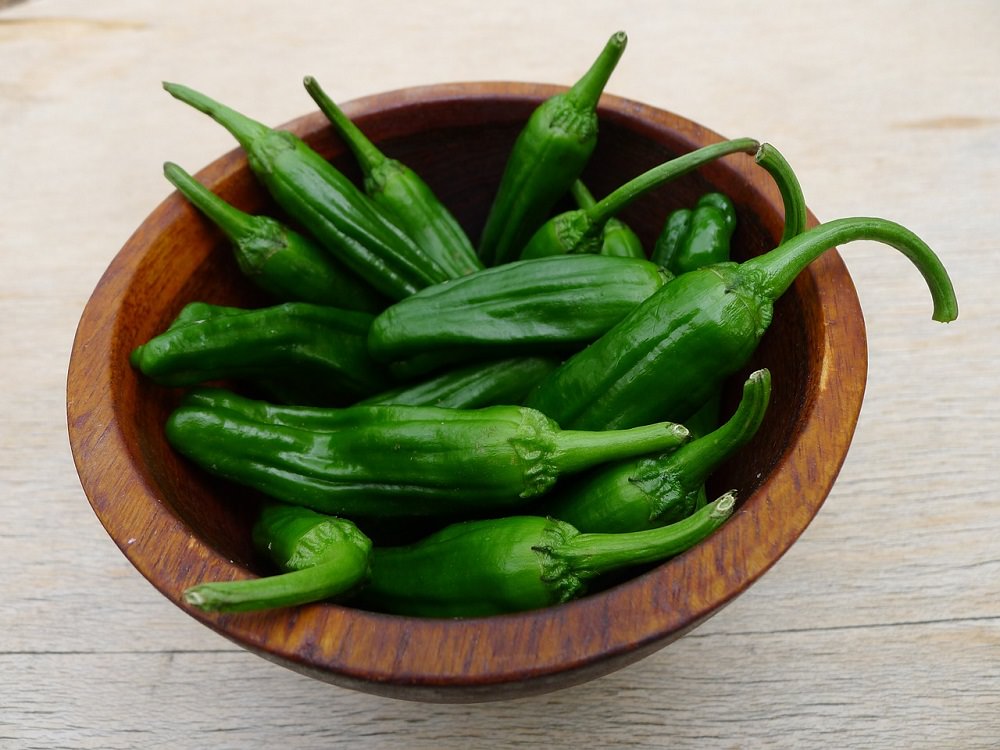 I first had shishitos at a place in Nashville. Then my CSA started growing them. My CSA is on hiatus right now so I picked up a bag of them at the farmers market to make charred shishito peppers.

I cook them in a black pan that’s not cast iron but acts the same way. Heat up the pan, add a few glugs of olive oil and let it heat up, add the whole peppers (stem and all) and let them char while you toss them around so they don’t get too burnt on one side only. I like to cook them so some sides are charred and some are just blistered. Take the pan off the heat and sprinkle on a generous amount of sea salt and then some squirts of lemon juice.

I made an easy summer squash gratin with a mix of yellow and zucchini squash that I based on this recipe from Peas and Crayons. I added red bell pepper and skipped the spinach. Since I had saltines left over from making an Atlantic Beach pie, I used them for the topping.

We have a new summer favorite: peach glazed chicken thighs. The farmers market is overrun with peaches. I was having trouble keeping up with my supply before they got too soft so I decided to turn some of them into dinner. I found this recipe on The Seasoned Mom blog. The only change I remember making is reducing the brown sugar. I may just eliminate it next time since in-season peaches are soooo sweet.

I can’t talk about cooking without mentioning fish. Every week, I pick up my CSF (community supported fishery) share of two pounds of North Carolina fish from Locals Seafood—who have a new website, nice. Two weeks ago (I’m a little behind on my blogging here), my share included king mackerel and striped mullet.

Mackerel is full-flavored so doesn’t need much—unless you don’t like all that flavor, but we do. I found an Epicurious recipe for roasted mackerel with garlic and paprika—real simple and tasty. I just noticed it’s a Gordon Ramsey recipe. I didn’t make the vinaigrette, only the garlic/paprika paste—a fabulous idea.

The next night we had southwestern striped mullet. Striped mullet, per Locals Seafood, has a “rich, nutty flavor and buttery texture… [that] can be cooked in almost any fashion.”

I read somewhere about soaking striped mullet fillets in spiced buttermilk, so that’s what I did. My buttermilk was seasoned with garlic salt, ground ancho chile powder, chipotle powder and coriander. Then I dredged the fillets in cornmeal and pan-fried them in grapeseed oil, a few minutes per side. As they were done, I transferred them to a paper towel-lined plate and squeezed lemon juice on them. Good and quick. I’ll do that again.