The kitchen highlight of the week was Louisiana oyster and linguiça bake, an Emeril Lagasse recipe. The recipe doesn’t call for linguiça—a garlic paprika Portuguese sausage—but that’s what I always use. I know Emeril would approve because he’s half Portuguese. I also added baby spinach to the mix—I think he’d be okay with that too.

I usually buy my linguiça online in bulk from Amaral’s in New Bedford or Gaspar’s in North Dartmouth, MA—just down the road from Emeril’s hometown, Fall River. In fact, Gaspar’s has an 8# deal going on right now, so I just ordered more linguiça and chouriço (a spicier sausage).

Instead of shucking 50 oysters, I shucked 6 for myself—Hatteras Salts, so good—and then steamed the rest for about 4 minutes. I still had to shuck them but it’s a lot easier when the shells have opened a bit. They stayed fairly plump too. Oh, and I strained and froze the leftover oyster broth. You never know when that will come in handy! 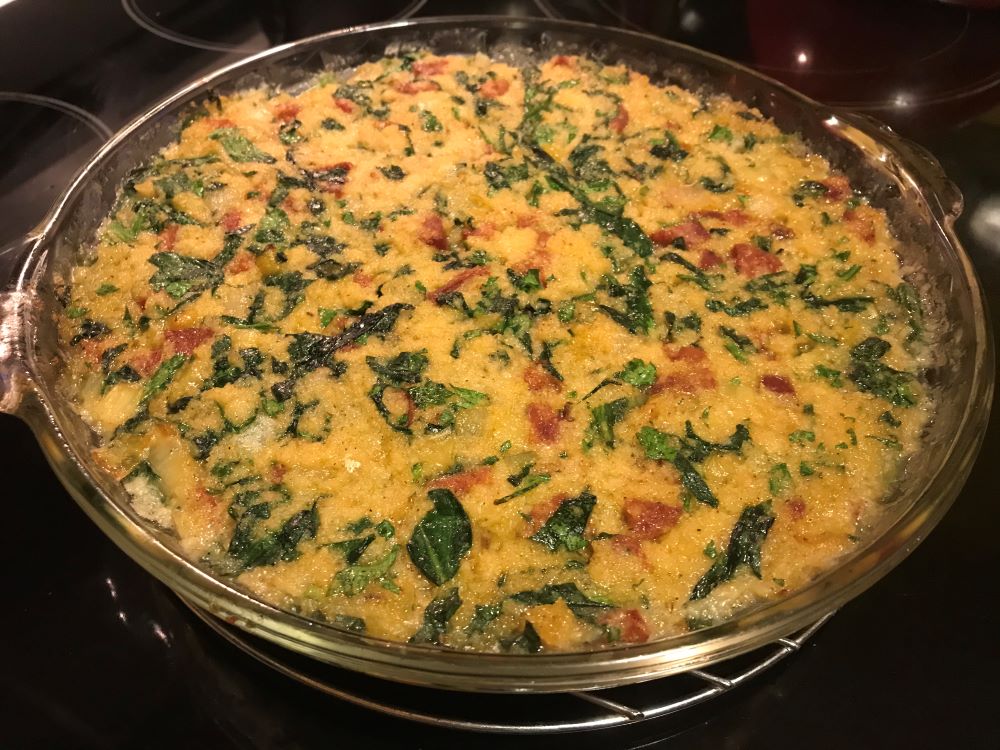 Bluefish with tomatoes and garlic-shallot oil

Another night I made bluefish poached with tomatoes, garlic-shallot oil and lime. I used regular couscous instead of the Israeli couscous called for in the recipe. I loved the garlic-shallot oil—I can imagine it on all kinds of things.

Since the meat shelves are bare at the supermarket, it’s a good thing I have plenty of local fish in the freezer. On Sunday, I wanted to prepare enough fish for two meals, so I baked fillets of golden tilefish and dogfish. I topped them with salt and a bit of butter before they went in the oven.

The farmers market had baby Brussels sprouts. I was torn between roasting and sautéing them, but I had an idea about roasting them with halved red seedless grapes, red onion, garlic and thyme, so that’s what I did. 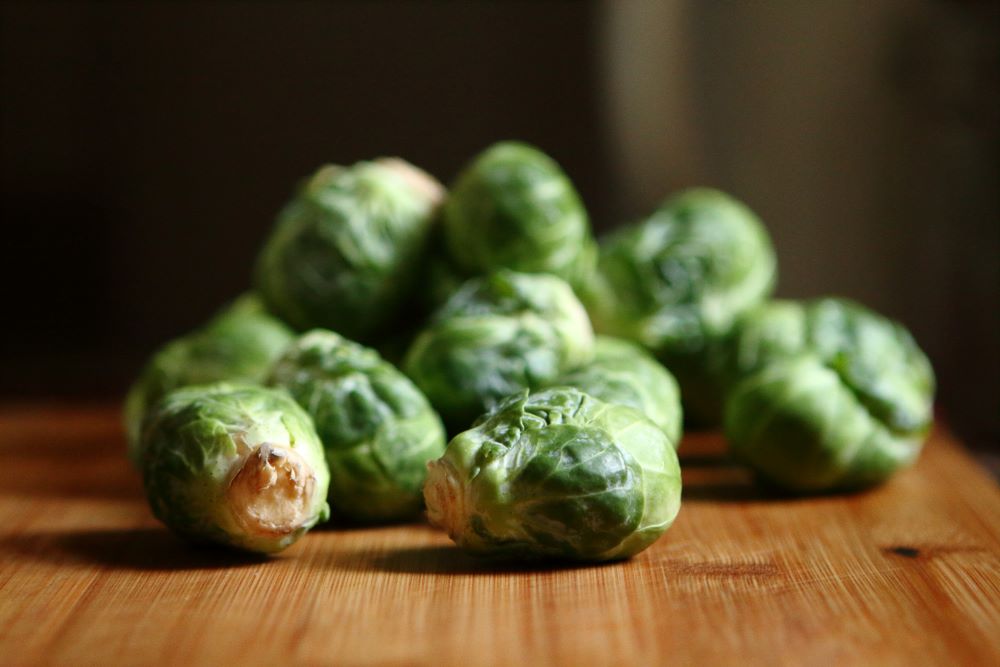 If you’re convinced you don’t like Brussels sprouts, try roasting them. Trim the ends, cut the big ones in quarters, and the rest in halves. Toss with olive oil and sprinkle with salt. I always add red onion too if I have some around. Bake them until they’re fork-tender and caramelized. You’ll change your mind about Brussels sprouts.

You could also add cubes of potatoes (white or sweet), winter squash, red bell pepper, jalapeño… trying to think of what else. If you want to add garlic and/or dried herbs, wait until you’re nearing the end of the cooking time so they don’t burn. Toss any fresh herbs with the veggies after they come out of the oven.

Another option is sautéing Brussels sprouts. I usually slice them (after trimming) into three or four pieces. Maybe that sounds tedious but it’s kind of zen. Start with bacon (or ham), onions and peppers (any kind, just not green bell), then later on the garlic, and get those softened a bit before adding the Brussels sprouts.

In both these preparations, the Brussels sprouts caramelize a bit, so their bitterness is offset by some sweetness, plus you have all those other good flavors. They don’t have that stinky aroma like they do when your mother boiled or steamed them—murder! Find a recipe online and go for it, they’ll enhance your life.

Stay-at-home with local produce and meat

Restaurants are suffering and dying, and small farmers are struggling too. My local farmer’s business depends greatly upon restaurant orders and she’s definitely not getting many of those lately. We’re in between CSA seasons but she’s taking online orders from anyone. She has pick-ups twice a week at the farm. Everything you order is sealed in a big brown bag.

I bet many of the small farmers in your area are doing something similar. I’ve seen small beef, pork, and chicken farms advertising farm pickups and some even deliver. Your local farmers market’s website might list the ones who are taking online orders. Or, see if your state has a farm stewardship organization (like this one)—they may have a list as well, although ours is not complete.