Have you ever seen a watermelon radish? From the outside it looks a bit like a blushing turnip tinted with green. 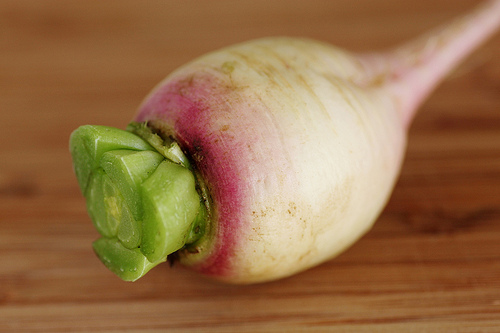 But sliced open, the pretty pink inside is revealed.

The watermelon radish is an heirloom variety of daikon radish that we’ve been getting in our CSA share the last few weeks. I’m not a huge fan of radishes, correction, radishes sold in supermarkets, but I love this variety. Its mild, sweet flavor reminds me of radishes I used to buy at the farmers market in Sacramento.

Although we’ve only used them in salads, I bet they would also make pretty crudités or quick pickles. Slather some sweet butter on a baguette and top with slices of watermelon radish – I used to do this with French breakfast radishes. Check out the Kitch’s Ingredient Spotlight post (and comments) on the watermelon radish for more ideas.

It’s a cool weather crop available in the spring and late fall. According to one of the websites I read, they’re all the rage at farmers markets so I hope you can find them.