If you’ve stayed away from broccoli rabe because it’s too bitter or weird, this is the recipe for you. Broccoli rabe will always be broccoli’s bitter cousin, and I love it for that, but adding sun-dried tomatoes changes the entire flavor profile.

I started the way I always do with broccoli rabe – blanching it while onions are caramelizing on the stove. The addition of sun-drieds came from a desire to add some color – I’ll never go back to my old rabe again, unless I’m out of sun-drieds.

I’ve been buying sun-dried tomatoes in packages from Trader Joe’s. I used to always buy oil-packed sun-drieds in a jar, but I believe the packages are cheaper per ounce. If the tomatoes are too dry, you can plump them in warm oil or water. Mine have been fine for cooking straight out of the package.

Update: Since publishing this post, I’ve been buying giant containers of grape tomatoes at BJs and slow roasting them in the oven. Oh my. These slow-roasted tomatoes are so much better than store-bought sun-drieds.

Give broccoli rabe a chance. This recipe is addictive. There will be no leftovers, I can promise that. 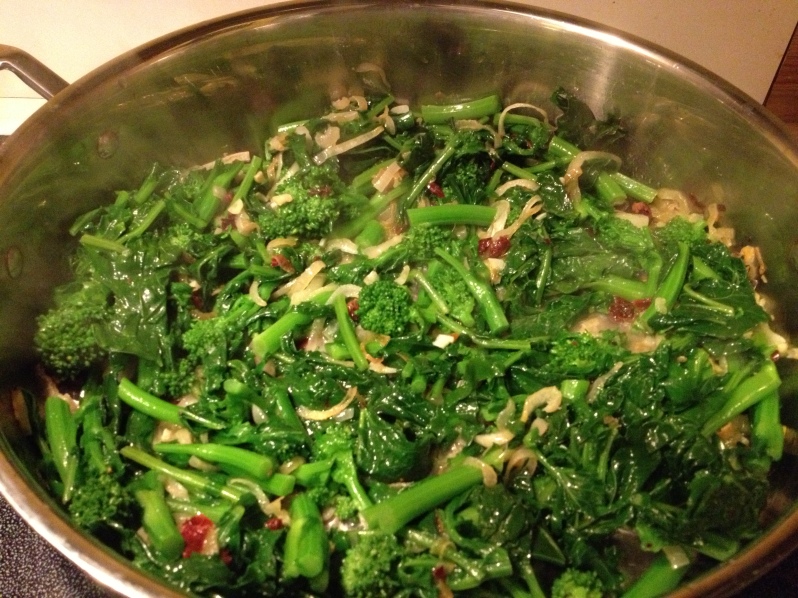 Broccoli rabe with onions and sun-dried tomatoes | Grabbing the Gusto

You’ll need a large pan, pot for blanching the broccoli rabe, colander or slotted spoon, bowl with ice water, and paper or cloth towels for patting dry the rabe.

Heat 2 tablespoons oil in a large pan on medium heat. Add the onions and some salt. Cook, stirring occasionally, until softened and lightly browned. If the onions start to dry out, lower the heat. You can also add a little water to them to prevent drying. When onions are done, add the chopped garlic and the red chile flakes. Cook until the garlic just begins to golden. Turn off the heat for now.

Meanwhile bring a pot filled at least half-way with water to a boil. When it comes to boil, add the broccoli rabe to the boiling water. Get a bowl ready with ice water. Blanch the rabe for only one minute, then drain in a colander or use a slotted spoon to remove the rabe from the hot water. Immediately dunk the rabe in a large bowl of ice water to stop the cooking. Drain the rabe and pat dry with paper or cloth towels.

Return the pan with the onions to medium heat. Add the blanched broccoli rabe. Toss to coat with the olive oil, onions, garlic and chile flakes. Cook the rabe about 5 minutes, until just tender. Stir in the sun-dried tomatoes. Sprinkle everything with salt, black pepper and the grated Parmesan cheese to taste. Toss to combine.

10 thoughts on “Broccoli Rabe with Onions and Sun-Dried Tomatoes”