Impress your family (and yourself) with these pork chops stuffed with sun-dried tomatoes and spinach — a fantastic recipe. If you have time to brine the chops, they’ll be tender and juicy.

The first time I made this dish – a Giada recipe – the stuffing was fabulous, but the pork, although nicely browned, was a bit tough. Grrr.

Pork can be like that if you cook it even a bit too long. I’m often a bad judge of doneness. Even when I follow a recipe and test the meat with a thermometer on the early side of the cooking time, sometimes it’s already gone past the ideal temperature. Jim thinks this is amusing since I do so well in other culinary departments, but meat, argh, it’s a battle.

However, there’s a way to get tender, not tough, pork even if you screw up a bit – brine it first! Yes, you’ll have to plan ahead and allow enough brining time, but it’s worth it. The second time I made this, the pork was perfect – browned, juicy and tasty.

Do you really need kosher salt for this or will regular old table salt do? Kosher and table salt have different densities – that’s what makes the difference. J. Kenji López-Alt, managing culinary director at Serious Eats, says, “If you are measuring by volume, different types of salt are not interchangeable. A cup of table salt will have twice the salting power of a cup of Diamond Crystal Kosher salt.”

I keep kosher, sea and table salt on hand and use what the recipe specifies unless I think the recipe’s just trying to be trendy. Honestly, in this case, you could probably get by with regular table salt. If I’m wrong, let me know why. Morton’s has a salt conversion chart so you can substitute the proper amount. In this brine, use whatever you have on hand – 2 tablespoons of kosher salt or a scant tablespoon of table salt. 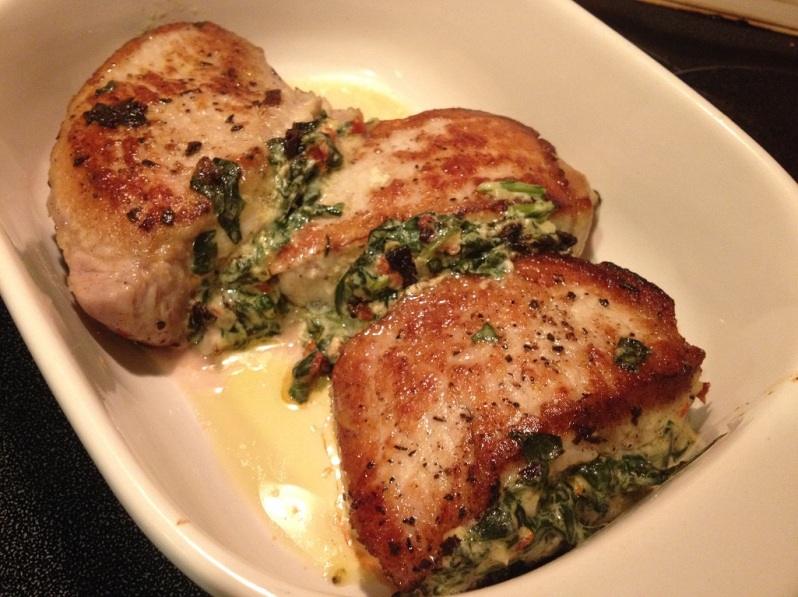 Heat one cup of the water to a simmer either on the stovetop or in the microwave. Add the salt and stir until it has dissolved. Mix in a second cup of cold water to cool the brine down and let the mixture stand until it’s lukewarm.

Place the pork chops in a shallow dish and pour the brine solution over them. The brine should completely cover the pork. If not, either transfer the pork to a smaller container or flip the pork halfway through brining. Cover and refrigerate for 1 to 3 hours.

Remove the pork from the brine, pat them dry and let them warm on the counter. Discard the brine.

Warm 1 tablespoon of the olive oil in a pan over medium heat. Add the garlic and cook until fragrant, about 1 minute. Add the sun-dried tomatoes, spinach, salt, pepper and thyme. Stir and cook until the spinach is wilted. Transfer the mixture to a medium bowl. Add the goat and or cream cheese. Stir to combine and transfer to a bowl. Clean skillet out to use again.

Use a sharp knife to cut a pocket into the thickest portion of each pork chop. Stuff each pocket with 1/2 of the spinach and sun-dried tomato mixture and close the pork around the stuffing. Season the outside of the pork with salt and pepper.

In a small bowl combine the chicken broth, lemon zest and lemon juice.

Warm the remaining 1 tablespoon olive oil in a large, heavy skillet over medium-high heat. When the pan is hot add the pork. Cook until golden and cooked through, about 4-6 minutes per side. If the filling starts to fall out, push it back in with a spoon or spatula. When done, transfer the pork to a side dish and tent with foil to keep warm.

Add the chicken broth mixture to the skillet over medium-high heat. Scrape up the brown bits from the bottom of the pan as the chicken broth simmers. Reduce the broth by half to make a light sauce, about 8 minutes. Spoon some sauce over the pork before serving.